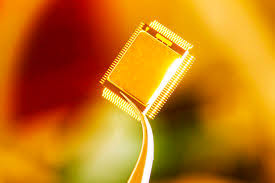 has just made another giant leap forward. Live Science has recently reported on the development of a microchip that has achieved “infinite” speeds. According to Live Science:
“For the first time, scientists have achieved infinite speeds on a microchip. Although this advance will not enable faster-than-light starships, the light-warping technology behind this innovation could lead to new light-based microchips and help enable powerful quantum computers, researchers said.”
I have written in the past about quantum computing and the potential hazards. The main thing to understand is quantum computing relies on quantum entanglement, a phenomenon of quantum physics that is not currently understood. From my article entitled “Quantum Computing and Catastrophic Consequences are Closer than Realized“:
When two particles are entangled, they have the ability to communicate with one another at instantaneous speeds; even faster than the speed of light. This is thought to be physically impossible because of all the paradoxes FTL (faster than light) speed is supposed to cause. For example, the closer one accelerates to the speed of light, the slower time moves for the traveler. At the point the traveler reaches the speed of light, time literally stops. If somehow the traveler could accelerate even faster, time would begin running backwards. There is also the problem of mass: the closer an object comes to the speed of light, the more mass it gains. To reach the speed of light, an object would have infinite mass, which of course is physically impossible. Photons, the particles of light, are massless by nature which is how thy can travel at such in incredible speed.
One theory to explain quantum entanglement, and by far the most convincing, is that this phenomena is operating through higher dimensions

. When more spatial dimensions are added, things that seem physically impossible can become possible. For example, think of a two-dimensional triangle. We know based on the rules of geometry that every angle of the triangle should add up to 180 degrees. Now imagine if we were to measure the angles of the triangle and discover to our astonishment the angles add up to a value great than 180 degrees. How could this be physically possible? It’s simple when we add another spatial dimension. If the triangle was fixed on the surface of a sphere, for example, the angles would add up to higher that 180 degrees due to the curvature of the lines making up the triangle. Thus the impossible becomes possible.
If quantum entanglement is operating in higher spatial dimensions, then quantum computing would essentially possess extradimensional

processing power. There would be virtually no limit to what could be achieved with such a machine. The elite in control of such technology would have access to god-like abilities and power. When considering how much control the elite have over the general population of the world from utilizing the technology of today, it is frightening to consider what will be done when quantum computing provides nearly infinite possibilities.
The other issue is the technology required of quantum computing is so vastly outside of our realm of understanding, we would be tapping into something we can’t hope to comprehend. We have no idea what the consequences to opening the world up to higher dimensions would be. Biblical end-times prophecy speak of a time when the separation between the spiritual world and our own will be breached, allowing in eternal and extradimensional beings who will choose to wreak havoc on the earth. Utilizing quantum computing might very well be the first step to fulfilling those prophecies.
READ THE REST OF THE ARTICLE HERE:
As heard on The Hagmann Report

HELP THE HAGMANN REPORT STAY FIGHTING UNTIL THE END

DONATE BY PATREON OR PAYPAL